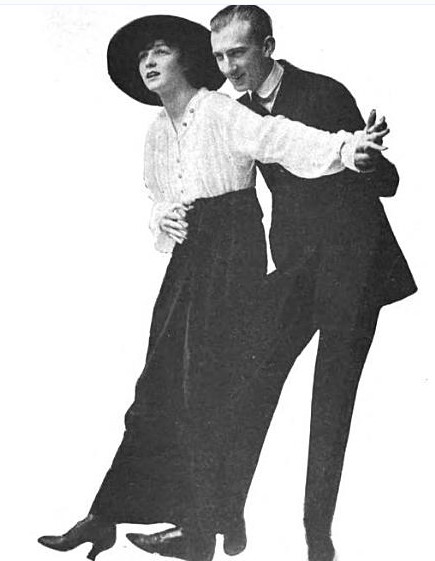 The Maxixe is essentially "Africanized" Polka or Two-Step, meaning it was an Afro-Brazilian styling of the Polka which was brought to Brazil by European immigrants. The Maxixe, as danced in the United States, was probably not the original Brazilian form since it was first modified by French dancers when it was introduced there in 1905 by Mmes. Derminy and Morly (to the tune La Sorella — it didn't catch on) and was modified again when it was successfully re-introduced in 1912 by Monsieur Duque ("The Duke" – the stage name of Brazilian dancer and composer Antonio Lopes Amorim Diniz, who moved to Paris in 1909). It is said that the Maxixe fad was launched the same year as the Titanic and lasted about as long.

Easier ragtime era dances like the One-Step and Foxtrot were danced freestyle, but the Maxixe was so difficult that it was usually practiced in choreographed sequences. Both of these sequences were choreographed by Richard Powers, based on steps described in ragtime era dance manuals, a 1915 silent film of Vernon and Irene Castle dancing the Maxixe, and Fred Astaire's interpretation in The Story of Vernon and Irene Castle. Fred Astaire is considered to be a primary source for the Maxixe because he watched the Castles perform it many times in 1914 when Fred and his sister Adele were young dancers in vaudeville.

The Maxixe (also spelled Mattchiche and Matcheche) was sometimes danced to authentic Brazilian music, such as Dengozo by Ernesto Nazareth, but just as often was danced to Tin Pan Alley compositions (collection of New York City music publishers and songwriters who dominated the popular music of the United States in the late 19th century and early 20th century) like Down in Zanzibar, or Buenos Dias Maxixe by Indiana ragtime composer Kathryn Widmer.

The Argentine Tango was the brighter star on the dance floor in 1912, so to sell more dance music, some publishers began to promote the Maxixe as another form of Tango with slowed tempos to match the mood of the Tango. Some dance bands also recorded the slower Tango-style Maxixe for the phonograph, but the authentic renditions were bright, cheerful and more like a Two-Step.

Maurice Mouvet wrote in 1914, "The Brazilian Maxixe can be danced to any Two-Step, whereas the Tango can be danced only to Tango music. The Maxixe is peculiarly adapted to the American temperament. It is full of snap and life, while the Tango is slow and languorous." In other words, don't dance the Maxixe like a Tango.

The Evolution of the Maxixe - The Samba

Wistful of his 1912 success, Monsieur Duque traveled back to Brazil ten years later to see what the latest version of the dance looked like and found that it was now bouncier, no longer traveled line of dance, had some new variations, and was sometimes called Samba.

During the season of 1922-23, he introduced the Brazilian Samba, the next evolutionary stage of the Maxixe, at his Montmartre dance hall Shéhérazade. The famed Afro-Brazilian orchestra Les Batutas (Os Oito Batutas) provided music for the premier.

At that time, the Samba was still unknown in England and the United States, but it didn't take long for it to spread through the ballrooms of western Europe and America. The Samba continued to evolve in Brazil, but European and American social dancers were happy with the version they learned, and kept it essentially the same for decades, not realizing that it's a snapshot of 1923 Samba, and resembles today's Brazilian Samba about as much as adults resemble their childhood photos 84 years later.

You can also search for Maxixe to check for alternative titles or spellings.