The Foxtrot is a smooth, progressive dance characterized by long, continuous flowing movements across the dance floor. It is danced to big band (usually vocal) music. The dance is similar in its look to Waltz, although the rhythm is in a 4/4 time signature instead of 3/4. Developed in the 1910s, the Foxtrot reached its height of popularity in the 1930s and remains practiced today.
Contents [hide]

A beautiful, romantic dance, the Foxtrot is composed of fairly simple walking steps and side steps. The dance combines slow steps, which use two beats of music, and quick steps, which use one beat of the music. The footwork timing is usually "slow, quick, quick" or "slow, slow, quick, quick." The Foxtrot must be danced very smoothly, with no jerking of the body. Timing is also a very important component of the Foxtrot. As the Foxtrot is more challenging than other styles of dance, it is usually recommended to master the Waltz and Quickstep prior to attempting it.

The dance was premiered in 1914, quickly catching the eye of the husband and wife duo Vernon and Irene Castle, who lent the dance its signature grace and style. The exact origin of the name of the dance is unclear, although one theory is that it took its name from its popularizer, the vaudeville actor Harry Fox. Two sources credit African American dancers as the source of the Foxtrot: Vernon Castle himself, and dance teacher Betty Lee. Castle saw the dance, which "had been danced by negroes, to his personal knowledge, for fifteen years, [at] a certain exclusive colored club".

W. C. Handy ("Father of the Blues") notes in his autobiography that his "The Memphis Blues" was the inspiration for the Foxtrot. During breaks from the fast-paced Castle Walk and One-Step, Vernon and Irene Castle's music director, James Reese Europe, would slowly play "The Memphis Blues". The Castles were intrigued by the rhythm created a slow dance to go with it. The Castles introduced what they then called the "Bunny Hug" in a magazine article. Shortly after, they went abroad and, in mid-ocean, sent a wireless to the magazine to change the name of the dance from "Bunny Hug" to the Foxtrot. It was subsequently standardized by Arthur Murray, in whose version it began to imitate the positions of Tango.

At its inception, the Foxtrot was originally danced to Ragtime. From the late teens through the 1940s, the Foxtrot was certainly the most popular fast dance and the vast majority of records issued during these years were Foxtrots. The Waltz and Tango, while popular, never overtook the Foxtrot. Even the popularity of the Lindy Hop in the 1940s did not affect the Foxtrot's popularity, since it could be danced to the same records used to accompany the Lindy Hop.

When Rock and Roll first emerged in the early 1950s, record companies were uncertain as to what style of dance would be most applicable to the music. Notably, Decca Records initially labeled its Rock and Roll releases as "foxtrots", most notably "Rock Around the Clock" by Bill Haley and His Comets. Since that recording, by some estimates, went on to sell more than 25 million copies, "Rock Around the Clock" could be considered the biggest-selling Foxtrot of all time. Today, the dance is customarily accompanied by the same big band music to which Swing is also danced.

Over time, the Foxtrot split into slow and quick versions, referred to as Foxtrot and Quickstep respectively. In the slow category, further distinctions exist between the International or English style of the Foxtrot, both built around a slow-quick-quick rhythm at the slowest tempo, and the American Style, using a slow-slow-quick-quick rhythm at a somewhat faster pace. In the context of the International Standard category of [Ballroom Dance|Ballroom Dances]], for some time the Foxtrot was called "Slow Foxtrot", or "Slowfox". These names are still in use, to distinguish them from other types of Foxtrots.

The Foxtrot is very similar to the Waltz. Both are extremely smooth dances that travel along a line of dance counterclockwise around the floor. The rise and fall action of the Foxtrot comes from the long walking movements made by the dancers. The dance combines quick steps with slow steps, giving dancers more flexibility in movement and greater dancing pleasure.

Distinctive to the Foxtrot, dancers take long steps during the slower counts, and short steps during the faster counts. In order to maintain the "trot" of this dance, dancers should shorten their steps as the tempo of the music increases. Some of the steps create attractive zig-zag patterns on the dance floor. A couple of steps distinctive to the Foxtrot are the Weave and the Feather Step:

The Foxtrot is typically danced to big band Swing-style music but maybe danced to most music types.

In the Foxtrot, the first and third beats are accented more strongly than the second and fourth beats. The foxtrot is typically danced to big band Swing-style music written in 4/4 time, with a tempo around 112 to 120 beats per minute (varies). 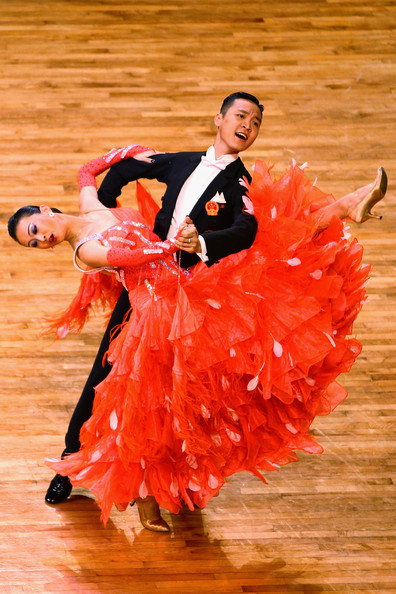 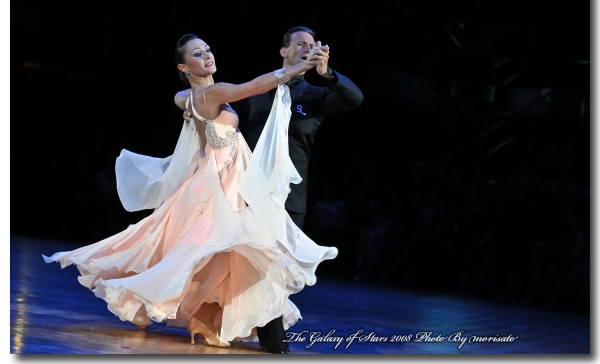 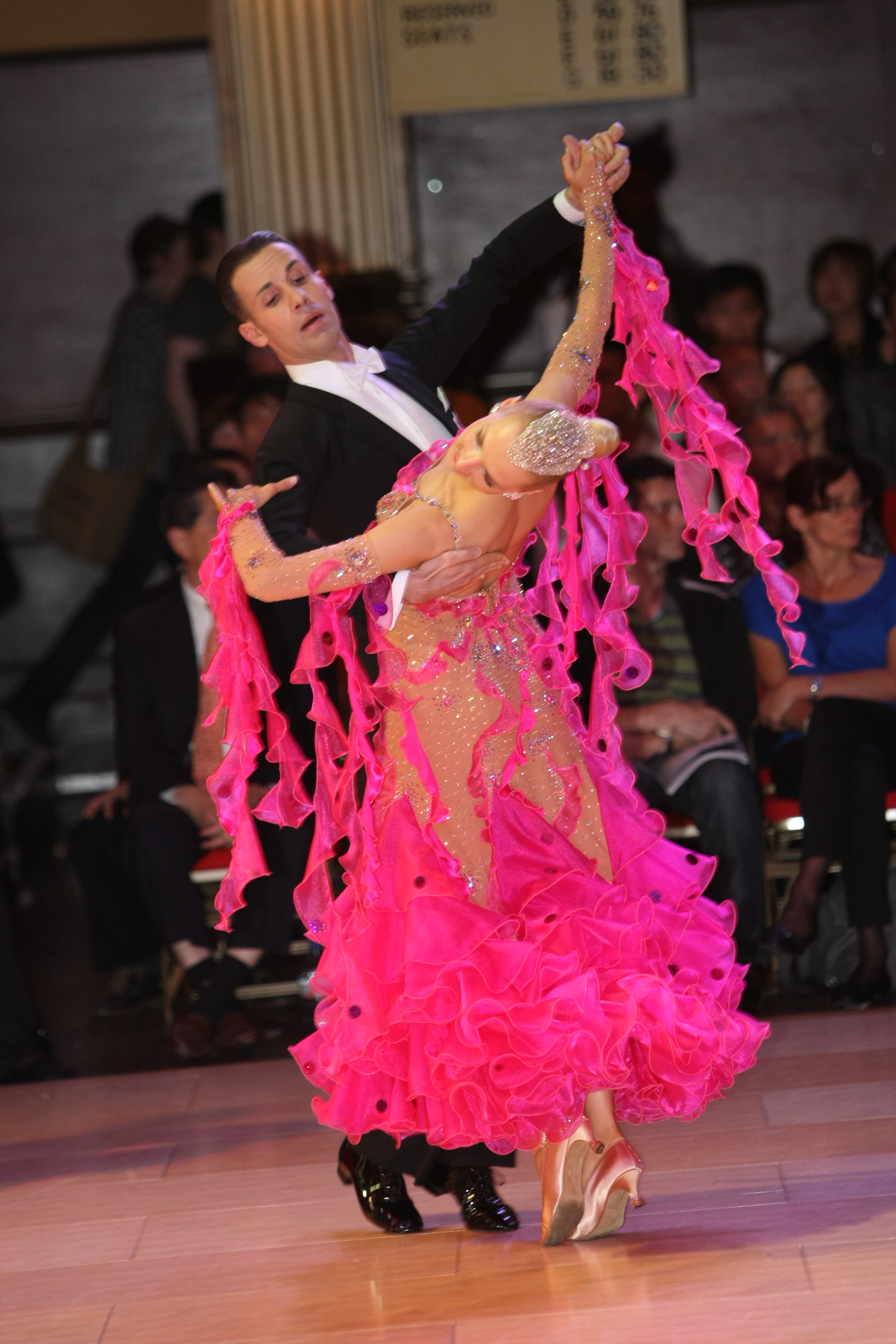 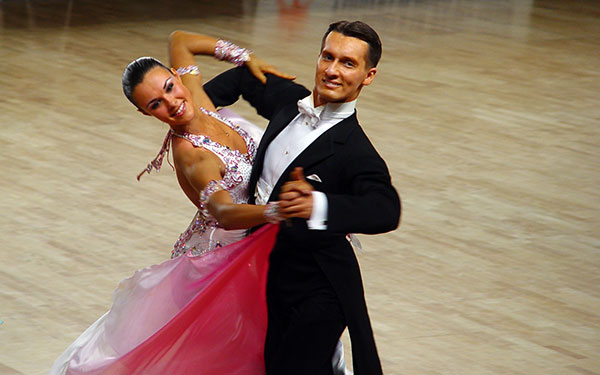 You can also search for Foxtrot to check for alternative titles or spellings.